What has wings, wheels, and a pilot? A giant tooth? A red go-go pump? A grill? A Chicago-style hot dog? At Red Bull’s 2013 Chicago Flugtag, the answer was all of the above.

Approximately 60,000 spectators crowded into Burnham Park on Chicago’s South Side Saturday, Sept. 21, to see their favorite crafts roll from a 30-foot high ramp into the waters below. The winners, team Chicago Duck Hunt, flew 39 feet and wooed the crowd with a replica of the 1985 Nintendo game, Duck Hunt.

To anyone who has never been to Flugtag, it may seem hard to imagine. DePaul senior Angelika Giatras has worked two years for Red Bull, and described what the unusual event looks like.

“Flugtag is, I guess, playing off of the whole ‘Red Bull gives you wings,’” Giatras said. “[The event is] super self-mocking, because obviously, the goal is for [teams]to make the [crafts]fly. I guess, it’s basically who can get the farthest distance.”

The world record for the longest distance was set in Mainz, Germany last year at 228.97 feet, but was replaced on Saturday in Long Beach, Calif. by The Chicken Whisperers team with 258 feet.

Though distance was impressive, showmanship and creativity were two other vital components to winning gold at Flugtag.

“[The team name] was more of a “why not” thing,” a team member said. “I mean, [pterodactyls]jump off cliffs to get their ground speed anyway. We kind of just wrote it on the application and went with it.”

A group of dentistry students from Marquette University made up Team Frequent Flyer Smiles. Dressed in blue paper smocks and armed with giant inflatable toothbrushes, they scrubbed passerby while the tooth fairy danced atop their giant white tooth with wings.

At 1 p.m. however, the teams were forced to curb their enthusiasm and wait more than two and a half hours. Heavy waves and wind made safety teams decide to reconfigure the evacuation procedure for pilots after they landed in the water. After the first two hours of the wait, James Kolstad of the Frequent Flyer Smiles shook his head and said, “I can’t believe this.”

Red Bull crewmembers said the wave conditions were a concern because pilots ran the risk of being tossed into the concrete wall just a short distance away.

Dave Sineni of the drag-dressing team Hell on Heels shook his head while watching crews install extra supports on the ramp two hours after the expected start time.

His team was one of many to go home last year before getting the chance to fly their craft.

“At least last year they cancelled in the morning. Now it’s 1:00 and we were ready to go,” Sineni said.

Between 3:30 and 4 p.m. however, safety crews gave the thumbs up, and the crafts started falling, with style.

Jim Obos, of team Stellar Edge from Huntley, Ill. said they felt honored to fly in the Flugtag.

“We’re one of hundreds of teams across the world that got chosen,” Obos said.

Team Stellar Edge, outfitted in tight pants, 80’s wigs, and leather, were excited to bring their group of rock-scene enthusiast friends together for their first Flugtag. 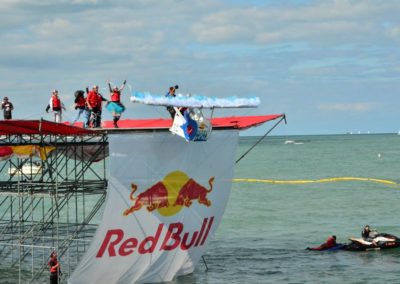 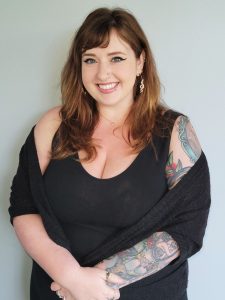 Clare is no stranger to small business having grown up with a mom-preneur who opened Around the Corner Candy in 1998. She grew from employee to manager to co-owner before deciding that she was destined for more than just the sweet life. Clare came to Stellar with a desire to learn new things and put her customer service skills to great use! As Marketing Assistant, she dabbles in a bit of everything from social media to email to web. Hardworking Clare fits right in with her love of animals, music, crystals and plants. Best known for her obsession with vintage horror, Clare’s house is decked out in paintings and prints from old movies & shows like Dracula, The Munsters, and The Twilight Zone. 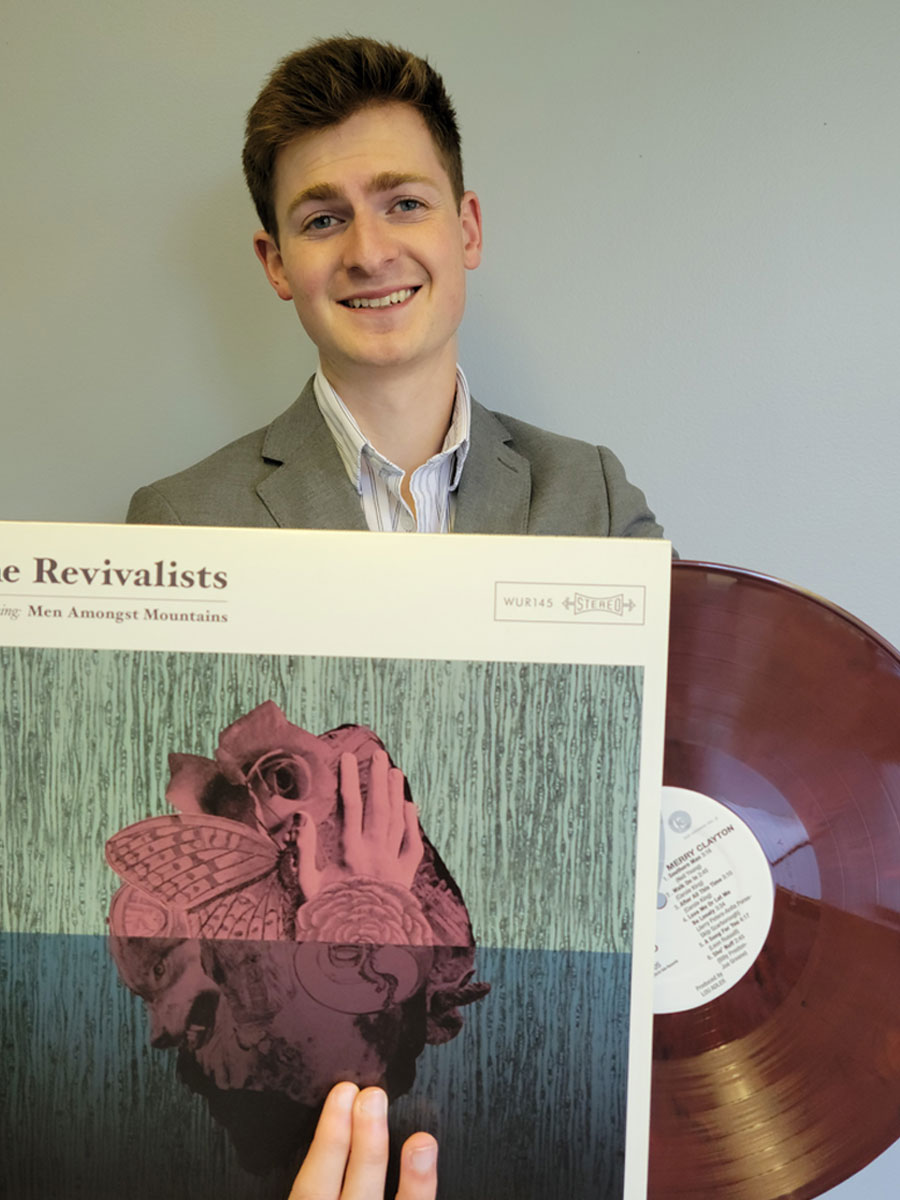 Devin grew up in a family business quickly learning that marketing is essential. Having graduated from Judson University with a Bachelor’s in Communications and a Minor in Marketing, Devin is infatuated with the art of storytelling. He can spin a client’s vision into a fantastic tale to create value and attract customers with flair. Devin is always one to dress for success… even if the situation doesn’t call for it. A ballroom dance instructor, Devin is an old soul who enjoys classic cars, old movies and collecting vinyl records. 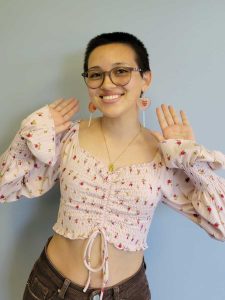 Bria joined the Stellar team just 2 days after her college graduation… talk about a go-getter! She is driven to help businesses shine combining both creativity and analytics. With a Bachelor’s degree in Marketing, Bria is ready to take on the world… or at least our amazing Stellar clients. Bria spends her time outside the office thrifting for clothing and collecting antique tea cups. Her unique style is present in her desk décor and the handmade earrings she wears each day! She is a mother… to over 20 house plants.

If you need something cleaned, call Harry. Seriously! Even if it’s not his mess, he’ll offer to fix it for you. As Stellar’s SEO expert, Harry's insight into a client's business is a valuable tool reaching more than just online audiences, but customers in the real world too! Harry has owned a handful of businesses since the ripe old age of 13 ranging from manufacturing to real estate to business services. A true Renaissance man, Harry can speak with someone for less than 30 minutes and have a complete business strategy worked out in his head leading them to definite success. A father of two teenage boys, Harry knows a thing or two about dealing with people on the brink of insanity. He fits in well at Stellar.

Named after Patrick Swayze’s character in Point Break, Bodhi joined the Stellar team in May 2017 and we don’t know how we got through the prior 6 years without an office dog! Adopted from Animal House Shelter, Bodhi is a Pitbull/American Bulldog mix that his human Lindsay cannot believe someone gave up. Bully breeds definitely get a bad rap because there is nothing sweeter than this 65-pound “lap dog” climbing into someone’s chair as we gather around the conference table. With as much charisma as his namesake, Bodhi greets visitors to the office with a toy in his mouth ready to play. He hasn’t quite developed any marketing skills just yet, but he can spot a duck or another dog out the window like nobody’s business.

Anything that gets thrown Kristin’s way is handled with ease… at least as far as we know. Coming from the retail industry, Kristin is no stranger to a fast paced, ever-changing environment and has no problem adapting to the chaos that comes with managing Stellar’s high profile clients. With years of experience managing all aspects of communications for Fortune 500 companies, Kristin is able to schmooze clients, conquer any task, and ensure everything is running smoothly… even when it’s not! A Hallmark movie fan, Kristin loves spending time with her firefighter husband and rambunctious toddler.

As an expert on all things entertainment, Stacy really knows how to roll out the red carpet for Stellar clients! Her background with Fortune 500 companies makes her well equipped to deal with the ups and downs of any industry. Stacy lives for creative marketing – finding award-winning ways to entice audiences to click, download, buy, or visit through branding, social media, web design, and merchandising. When she’s not dazzling customers, she’s hitting the gym or spending time with her family. A mom of two, she’s used to working well under pressure and taking the lead to make sure sh*t gets done – traits we welcome in the Stellar office!

Using a space heater at her desk year-round, Lynne is no stranger to turning it up. With a background in retail and corporate sales, Lynne brings practical knowledge to help Stellar clients determine their path to success. As our content writer extraordinaire, Lynne helps brands find their voice and reaches a whole new world of customers. You may hear her getting flustered from time to time, but it’s always short-lived. Her get ‘er done, take charge attitude works in her capacity at Stellar and as the busy mom of 3 busy boys.

As a lover of spicy treats, Christina is a no-nonsense, get the job done kind of a girl. Any task thrown her way is done quicker than you can say Siracha! As our resident Web Developer, troubleshooting issues is her specialty… just like at home as the mother of two young sons! Christina’s ad agency background and experience developing websites adds another layer of insight to our client’s marketing efforts. You’ll often see her hiking and biking with her family (with a stop off at their favorite Dairy Queen for a treat!).

Known around the office as Molly Pee Pee Pants, our resident Graphic Designer has more than just a small bladder. Her experience designing logos, developing brands, and creating amazing materials for Stellar clients brings a fresh perspective and artistic flair.  Molly’s easy-going attitude makes her the perfect candidate to work with constant changes and multiple ongoing projects. When she’s not out saving lives along the side of the road, she lives as a baseball widow and chauffeurs her kids to all their activities.

Known for her rainbow hair, Sin is never one to settle for just one style. She pushes the Stellar team to think outside the box and consider things they would have never done before. Her Bachelor’s in Graphic Arts & Illustration from the American Academy of Art is just the tip of what she’s learned. With real-world experience in business management, marketing and promotions, event planning, and vendor coordination, Sin’s experience gives Stellar an Edge over the competition (see what we did there?). Despite her edgy moniker, Sin is a kid at heart riding her scooter, dragging the Stellar team on crazy outings, and smothering her adult son and daughter with embarrassing hugs and kisses.

Known as the Dream Crusher, Lindsay’s level head keeps the office running like a well-oiled machine. When everyone else is trying to get in human-sized balloons and doing mid-day yoga, Lindsay is crunching numbers in a spreadsheet – literally one of her favorite things to do. With a Bachelor’s in Business Administration, Lindsay has the know-how to help Stellar clients make the right decisions to reach their goals. She loves problem-solving and making things work. She has a soft spot for kids and animals… she’s been known to grab babies from strangers and roll on the ground with any dog that will snuggle her.